There aren’t a lot of animated movies in this series, because for as much as I love animation, I am usually more knocked out by its visuals rather than its storytelling. But there are some animated features that really stand out to me, and chief among them is Heavy Metal, a 1981 animated movie based on the illustrated science fiction and fantasy magazine of the same name. Founded in 1977 (as a licensee of the French publication Métal Hurlant), Heavy Metal was a showcase of dark, adult work that frequently featured themes, violence and sex you couldn’t see in any mainstream comic book. It was a magazine for which I have had a hot and cold appreciation for over the years; the artwork is frequently brilliant, the stories less so, but it is a wellspring of adventurous storytelling. And the animated feature is no exception. It’s the kind of movie that quickly gained a cult status and lived on for years as one of those “Movies at Midnight,” until it could finally make its way into the home video market (the delay thanks due to some music licensing conflicts) in 1996.

The movie starts with a sequence in which a Corvette Stingray launches from an orbiting Space Shuttle, and the astronaut driving it pilots the car down to the planet’s surface, where he then drives to weird old house where things get even weirder. It’s maybe my favorite segment of the movie, visually, and the one that makes the least amount of sense, but it’s kind of a mission statement: we’re in a movie where you can land a Corvette from space, everybody. Strap in.

What follows is a series of short stories, all rather loosely connected by the presence of a green, glowing orb of alien evil that somehow destroys or corrupts everything it touches. In one segment, a dorky kid is transformed into a Conan-esque warrior who has a bloody and erotic adventure in another dimension. In another, a WWII bomber pilot must contend with his dead crew re-animating as zombies while they are still in mid-air. In another, a buxom secretary is abducted by aliens and proceeds to have sex with a robot while the aliens get completely stoned and accidentally crash their ship into a space station. And in the final segment, a female warrior named Taarna avenges the destruction of her city by an army of mutant barbarians created by the glowing orb. Throughout every segment we have a pretty aggressive blend of graphic violence, sex and nudity, and any other adult theme they could think of. The whole thing kind of feels like if you asked an entire school district full of teenaged boys to draw what they think would be the coolest hard rock album cover ever, told them it was okay to have women with no clothes on, and then animated the results. The results are a mixed bag, don’t age particularly well, and with the benefit of hindsight, offer a juvenile sensibility that makes your eyes roll more than it makes them pop. Even the animation, for which the movie is so often heralded, really doesn’t look that great. For that, we can thank the multiple studios who animated the movie’s sequences simultaneously, which kind of throws quality control out the window.

But this movie does occupy a special place in my heart, for all its warts, because it’s the movie that introduced me to animation that was way more grown up that I ever thought animation could ever be. And I saw that most in my favorite segment of the film, a story about a cabbie named Harry Canyon in a dystopian and far-future version of New York. He drives his hack around town all day, picking up mutants and weirdos, half of whom try to kill him. But along the way, he picks up a beautiful young woman on the run from some creeps who want an artifact she has. It’s a fun neo-noir story that surely influenced the first act of Luc Besson’s The Fifth Element. Of course, it wouldn’t be a Heavy Metal story without some gratuitous sex, so about halfway through the segment, Harry’s damsel in distress disrobes and jumps in the sack with him for a sex scene that, if you’re not expecting it, is way more detailed than you might be prepared for.

I remember when I first saw Heavy Metal, at my local Movies at Midnight. The Rocky Horror Picture Show was sold out, so I caught this one instead, which I had long wanted to see. As I watched Canyon and his girl get it on, I heard a lot of uncomfortable giggles throughout the audience. One guy who came into the theater right then loudly exclaimed, “What the hell is this? This is supposed to be a cartoon.”

There was a lot of laughter in the audience, but that guy’s reaction stuck with me as this movie’s moment of truth, because I think just about everybody who has ever seen Heavy Metal had that reaction at some point, and to some degree. But that moment was a powerful revelation for me about the limits on genre and medium aren’t agreed-upon rules, but limits of the imagination. Those limits are meant to be broken. It might just take a while for the right people to do it. Whatever you might think of Heavy Metal’s blend of skin and viscera, it gets credit for trying to tell stories that for the most part did not exist in this particular kind of cinema. A lot of it didn’t really work, but it made a huge impact on me, nevertheless. I had always enjoyed animation, but after seeing Heavy Metal, I fell in love with it. Heavy Metal isn’t exactly one of my favorite movies ever made, but am I deeply grateful for having seen it? Yes. Yes, I am. 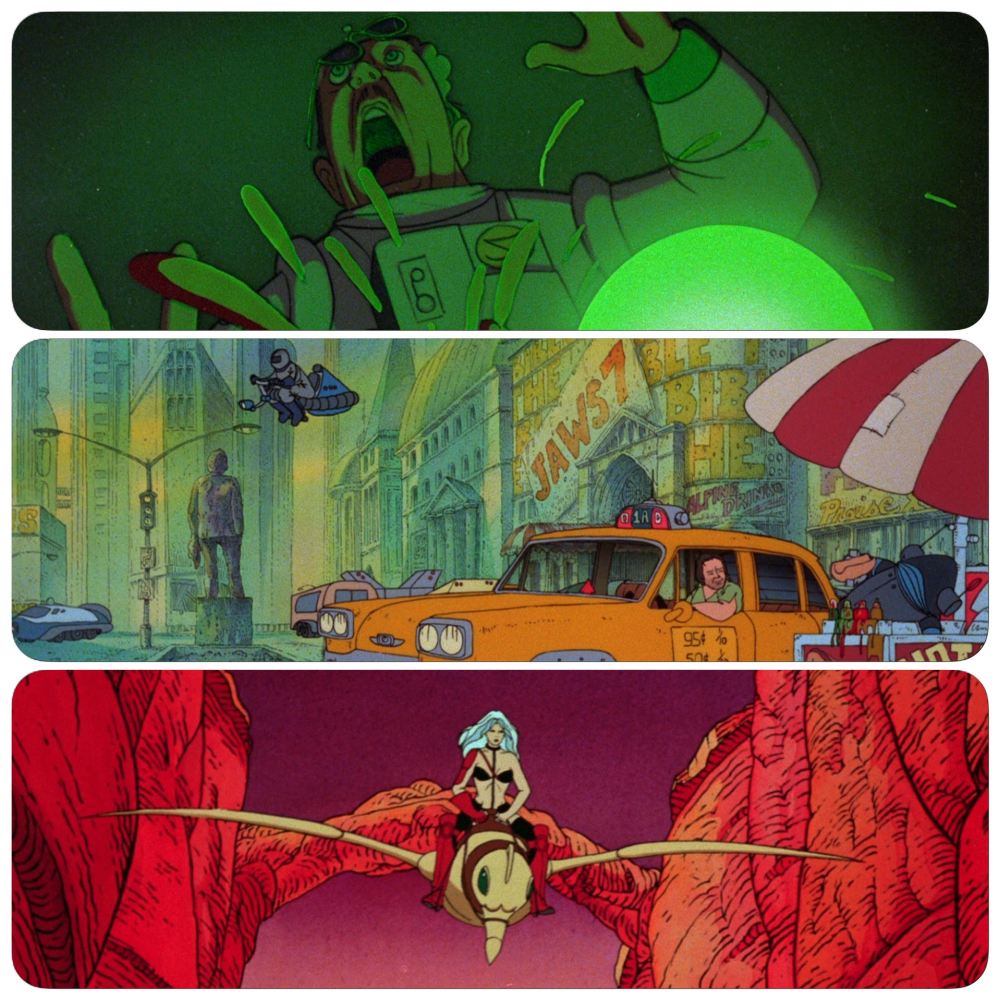