There is an old Indian parable about a group of blind men encountering an elephant for the first time. As each touches the elephant, they relay to the others what they think the elephant looks like. But because each blind man has a different set of information, they think the others are mistaken, perhaps even lying, and they come to blows. The moral of the story is how we tend to interpret large, complicated things with only partial perspective and/or partial information, and thus are unable to properly put things in their context, or know what the hell do so in response to them. That’s why Gus Van Sant named his controversial 2003 film, loosely based on the 1999 Columbine High School shooting, Elephant.

The story takes an American suburb, circa 2003. There, we see the lives of a number of high school students, focusing mainly a pair of boys, Alex & Eric, who I many ways seem like regular high school kids. They get bullied some by the jocks of the school, and they stick to each other, but don’t seem to give off any major warning flags. On their own, though, they watch Nazi documentaries, order guns off the internet, and meticulously plan to attack their high school with some bombs and following up with gunfire. Meanwhile, we follow another student John as he goes through his days. His father is an unreliable alcoholic, but that doesn’t stop John from being a fairly decent, regular kid. He shares a kiss in school with a classmate. He does regular high school stuff. And at one point, as he’s leaving the building, he sees Alex and Eric approaching, decked out in camo and carrying several large bags of ill intent. Alex and Eric must think John’s alright because they warn him not to go back into the school as they pass by. John knows in his heart what’s going to happen but is largely paralyzed as he reels to grasp the severity of his situation, and his feeble pleas to other students and adults to not go into the school go unanswered. Shortly after, Alex and Eric begin their attack, massacring a number of their fellow students and the principal. Alex kills Eric without warning, corners two more students in a cafeteria refrigerator, and continues his bloodbath.

When Elephant was released, it was barely four years since the Columbine high school massacre, which at the time was the nation’s high-water mark for a mass killing involving children. It wasn’t the nation’s bloodiest attack, nor the first. But it involved kids killing kids and raised an enormous amount of questions and concerns that have yet to be answered, so Van Sant’s film was controversial to say the least. Some pilloried it for providing a blueprint for future spree killers to follow. Others criticized its simple plot, slow pacing and use of first-time actors, all of which, frankly, make for a less-than-polished cinema experience. And then there were those who went after the film for its failure to condemn the killings it depicts by showing Alex and Eric as villains, or by failing to show a resolution to their attack, or by providing any kind of commentary at all. The movie essentially acts as reportage; an invisible third person who follows everyone as they go through a day of school without realizing that before it all ends, many of them will be dead.

The movie is not meant to fictionalize history or act as documentary, but to take a moment in time as a passing reference and build something narrative around that. And the narrative Van Sant builds is a simple one: two kids who feel isolated from the world ideate their own angers, frustrations, desires and awakenings into something shocking and destructive enough to make them feel that at last they have something worth living for, even though it will cost both their lives. Alex is clearly the leader of the two. Eric is glad to have something to follow. Together, they represent something neither would have done without the other, we feel. They are a unique chemical reaction. But…not that unique. After all, nobody ever criticized Elephant for being too far-fetched. Just for having the courage to imagine what the worst possible day in any kid’s life might look like, and to depict it drained of any kind of emotion. As violent as the final minutes of Elephant may be, they pass in a kind of fugue state, designed neither to excite nor horrify. Just to report and let its observers react for themselves, knowing that this movie, like the events it references, will eventually fade from memory.

The moment of truth comes in the final moments of the movie, as the school burns and bodies litter the ground. Outside, John stands and watches in stunned silence until his father, who had been called some time before, finally arrives, bewildered and out of breath. John tells him what happened as best he can, and all his father can do is look slack-jawed at his son with nothing to say. They both look at the school, and we realize that John’s father says nothing because he’s got no answers for any of this. How can he make sense of something so senseless when he can’t even manage to stay sober all day long? But his insobriety is really just a way of letting the audience off the hook, because John’s father stands in for every adult in this story. And by extension, every adult in the audience, too. After all, nobody noticed Alex and Eric drifting apart from the rest of the world. Nobody discovered their plot to destroy the school, even though they did little to hide it. Nobody prevented them from ordering their arsenal. Nobody took John seriously when he tried to warn people. Nobody came to the student’s rescue. Nobody did a damned thing until it was too late. And they always will. 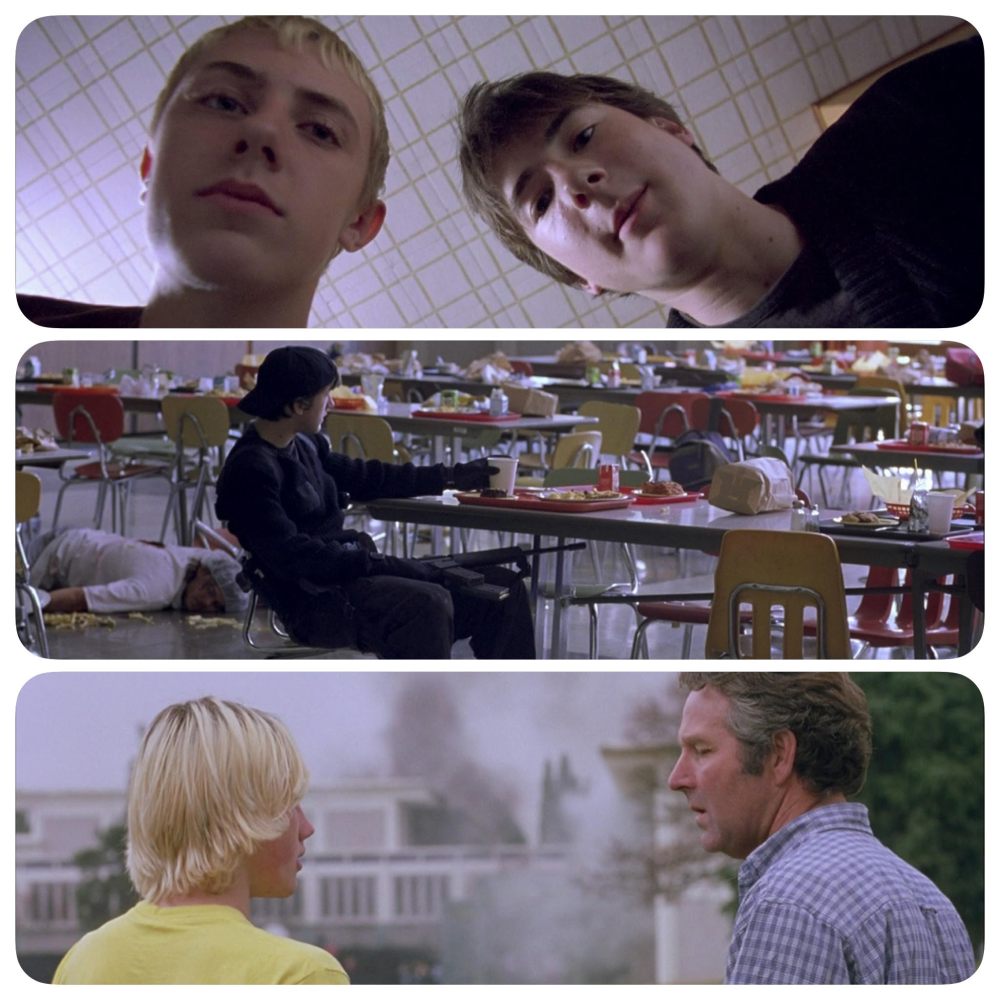