There is something about Nazism that calls out for a darkly comic treatment, to render its inherent horrors processable to those not given over wholly to hatred and destruction. After all, we would be hard pressed to find an ideology more morally abhorrent, and yet, its particular kind of evil seems to lay dormant within the deepest recesses of every person. For as much as we should confront Nazis wherever we find them, they are also deserving—however distantly—of a mote of pity. After all, many of us could easily be one of those goose-stepping wretches, given the right conditions. That grim truth calls for laughter to stave off tears, and to that end Kurt Vonnegut does so with Mother Night, his masterful tale of a wayward American Nazi, and its 1996 film adaptation by Keith Gordon.

The story takes place in 1960, as American war criminal Howard Campbell sits in an Israeli prison, awaiting trial. As he pens his memoirs, he describes how he was born in America and grew up in Germany, during the rise of Third Reich. Politically apathetic, Howard shrugs at the Nazis and stays behind as the rest of his family flees, so he can continue to pursue his successful career as a playwright. Campbell is well received within the upper echelons of Nazi society, but secretly professes political apathy in favor of dedicating himself purely to his wife Helga. But an American spymaster, Wirtanen, reminds Campbell that war is coming and that not taking sides will be impossible. As much by apathy as anything else, Campbell goes along with Wirtanen’s plan to become a Nazi radio propagandist, simultaneously inspiring Nazi audiences and covertly relaying coded messages to the Allies. As the war ends, Campbell goes into hiding and must imagine a life beyond his Nazi past. The more he descends into a realm where perception and reality cross over, the more his reason to live becomes merely the most compelling evidence that he truly is what he only thought he pretended to be: a traitor. To whom? To everyone.

Few writers besides Vonnegut could have imagined such a tale, let alone carried it off with such a sublime mixture of hopelessness, nonchalance and humor. What begins as a strange biopic of the worst kind of collaborator turns into a tragicomic postmortem of kinds, as we dwell at length on a world Campbell himself helped to build and, ultimately, destroy. This is a convoluted story in more ways than one, but something that that rewards our ability to appreciate where horror, tragedy and comedy cross over…and where they do not.

The story’s central theme comes in something Campbell says of himself: that you must be careful of what you pretend to be, for that is ultimately what you become. In Campbell’s case, he claims to be a Nazi in name only, using his connections with the party purely to advance his playwriting career. But when Wirtanen recruits him, Campbell takes to his new role as the American Voice of Nazism with a strange enthusiasm. Does he believe the hatemongering he broadcasts? Does he relish his power over people? Does he delight in being a spy, even though he does not know what information he is conveying? Yes, to all counts. As Campbell tells himself he is just playing a role and doing more good than harm, a visit to his in-laws in the final days of the war shatters all that. His father-in-law confesses that he never liked Campbell, but that his eloquent and passionate defense of Nazism gave him the certainty that Germany was pursing a moral cause, and hadn’t fallen into madness. And that Campbell’s words gave him the courage to keep fighting even when the war was obviously lost. It is such a thorough destruction of Campbell’s moral defense argument that the movie could have ended there.

But, no, we get to see Campbell languish for years after, haunted by his losses and by the truth, forced to hide his own identity, lest somebody discover who he really is. Of course, someone does (in one of the story’s more remarkable coincidences), which thrusts Campbell into the thoroughly unhinged world of post-WWII neo-Nazism. It’s funny only because of how pathetic it all is, but it is funny—especially when you meet characters like Robert Sterling Wilson, the Black Fuhrer or Harlem, and realize that guys like him are truly the best this motley assortment of evil halfwits can muster.

As Campbell gets sucked back into the world of Nazism once more, again neither truly embracing it but lacking the courage to reject it either, he sees, as we do, that these people can only offer themselves fever dreams of an impossible future based on tattered remnants of the recently ruined past. Ironically, they prove their detachment from reality with a gift they offer Campbell to join them: his wife Helga, long thought dead, but now miraculously delivered to New York. Of course, Helga isn’t what she is supposed to be, and Campbell knows it. But like everything else in his life, he is willing to cherry pick from both perception and reality to get what he wants. And it almost works until the moment of truth, when he attends a showing of one of his own newsreels and we see the projection of his youthful Nazi performance against Campbell’s own aging face.

He knows what he did. He knows he must pay for it, no matter what excuses he told himself. And so he does. In the movie’s final frames, we are given a surprise context to his final moments that drives home something that can never be forgotten: what we do is always judged by those outside of us. Our actions, and our inactions. Everything. It all matters. The only ones who think differently are either fools, evil, or both. Just ask Howard Campbell. He knows better than anyone that every crime against humanity begins with a crime against oneself. 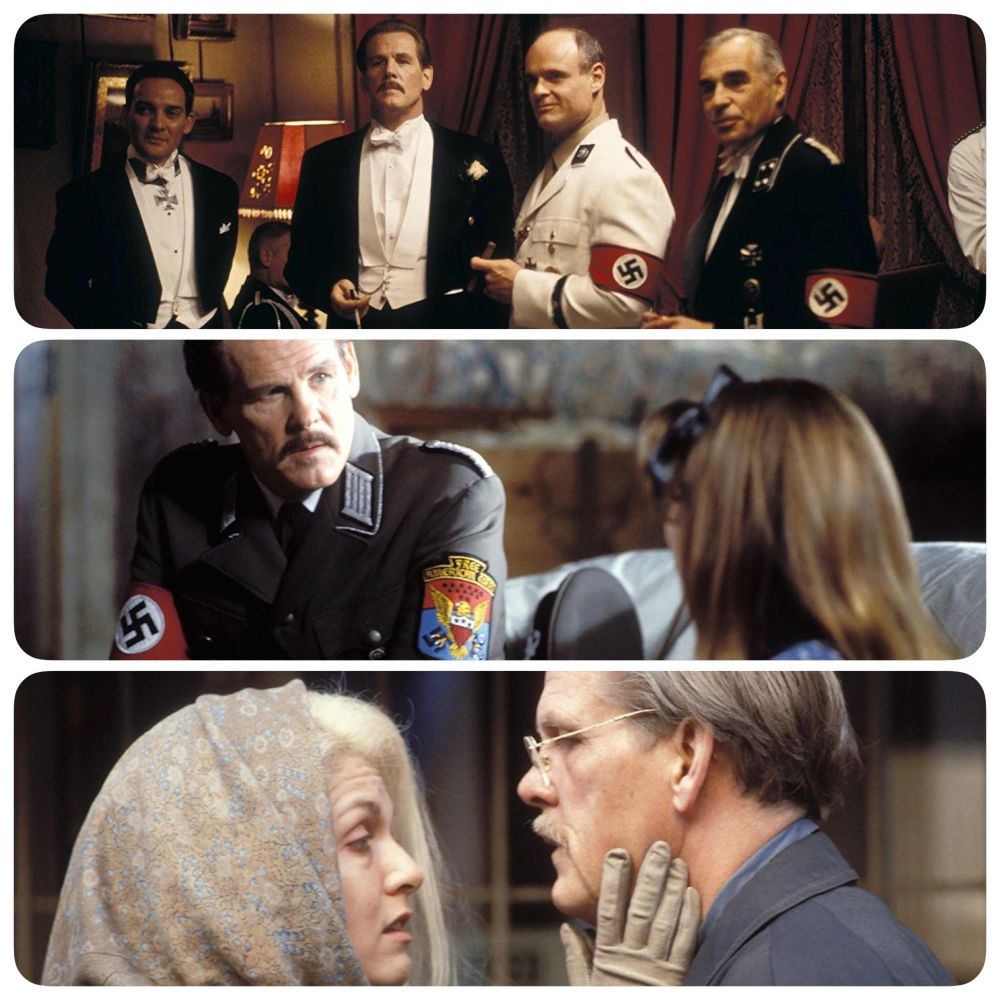